On 30 June 2010, Diario Médico, Correo Farmacéutico and Dmedicina.com granted the Web Favourites (Los Favoritos en la Red) awards to the websites that have best taken advantage of the possibilities provided by the Internet for communicating with doctors, pharmacists (chemists) and patients.

The Elisabeth d’Ornano Association, which has the mission of disseminating information on ADHD, on the preparation of parents, educators and doctors, and on the study of pharmacologic and non-pharmacologic treatments for this pathology, won the award this year for websites catering to patients, under the Associations category.

The event was attended by over 300 people, besides a number of authorities. Pablo Rivero, director general of the National Health System (SNS) Quality Agency underscored the potential of new communication technologies in assisting physicians and enabling patients to access the system. He also stressed the differences in the adequate management of knowledge as one of the differential and competitive factors between different healthcare systems. María Ángeles Palacios, Councillor of Healthcare and Consumption of Murcia, was also among the authorities present due to the great development of a number of web tools at the Murcia Health Service. Francisco J. Fernández, director de Correo Farmacéutico, spoke up for good journalism as a formula that remains in force and has not changed, regardless of the changes that have and will continue to take place in the technology format on which information is provided. 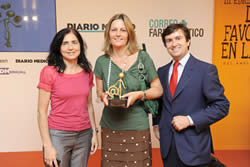 The utility of new technologies was highlighted in terms of taking knowledge and information to patients and the necessary opening role of the use of the web as a bi-directional means of communication between those in possession of knowledge and those in need of that knowledge. It was also noted that the web offers increasingly tangible results insofar as the Internet becomes established among Spaniards, whether they are healthcare professionals or patients.

It was also mentioned that utility was one of the essential criteria considered in the choice of the awardees.